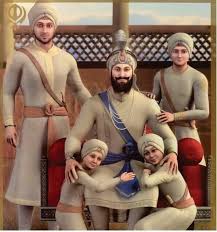 This week from 20th-27th December is the martyrdom week,
Let’s have a sneak peek.

20th December-
The Anandpur sahib fort was left alone,
Guru Gobind Singh Ji and his family left that dome.
Never again did they reunite,
Lost forever in that darkest night.

22nd December-
Bade sahibzaade
Then came the battle of Chamkaur, they took the permission,
Saving the brothers were their only mission.
Chote sahibzaade
Gold coins were stolen during the last night at Gangu’s house,
He told the kotwal about Guru’s family in his house.

23rd , 24th and 25th December.-
Sirhind was in Chote Sahibzaade’s fate,
They were a part of history to recreate.
What was their strength, how did they cope?
Mata Gujri, their Daadi, gave them hope.

Late December, chilly nights,
No food, or shelter, this was their plight.
We will not give up our religion at any cost,
Qazi order you will be bricked alive in the wall.

27th December-
It is known as the shaheedi diwas of chote sahibzaade.

24 thoughts on “THE DARKEST DAYS IN SIKH HISTORY”

SEARCH ON THIS BLOG