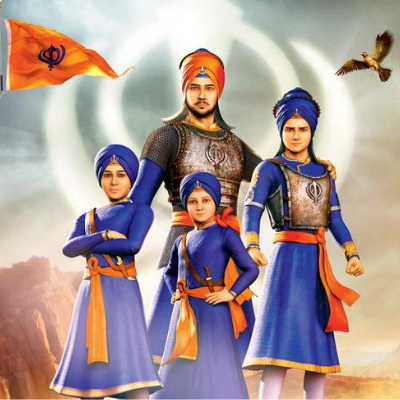 The offspring of our King,
Our spiritual Father, Guru Gobind Singh.
Settled in Anandpur, the city of bliss,
Learning Gatka, it was their wish .
Happy, and content
Living life, as it was meant.

Despite taking an oath, on the Holy Quran,
The Mughal Empire, had a different plan.
Leave the fort, we will not attack,
When it came to honour, they turned their back.

This was the moment, when they all got separated,
Crossing the Sirsa, before it got too late.
Never again, did they reunite,
Lost forever, in the darkest night.

Then came the battle, of Chamkaur,
The scene was set, they could resist no more.
They took the blessing, they took the permission,
Brothers were calling, this was their mission.

Out numbered they were, in the Battle of Chamkaur,
Yet still no fear, no blame or flaw.
Physical death, they did not fear,
Bole So Nihaal, was their constant cheer.

Fighting the battle, was not about the win,
Standing up for the truth, for kith and kin.
Tolerating injustice, is a cowardly act,
This was not their way, and they did not crack.

Gangu, the servant, had betrayed our Guru,
In return for money, he sold the truth.
Despite their tender ages, of six and nine,
They stood firm, they committed no crime.

What was their strength, how did they cope?
Mata Gujri, their Daadi, gave them hope.
Late December, chilly nights,
No food, or shelter, this was their plight.

They showed no mercy, no respect,
Our CHAAR SAHIBZAADE need our respect.

SEARCH ON THIS BLOG